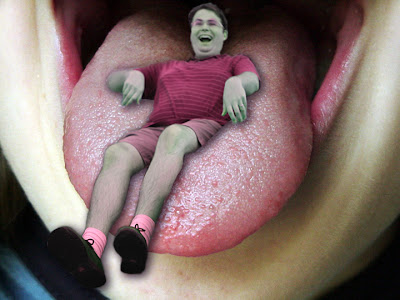 The Slippery Slider Gourmet -Tas T. Buds (without Tas T. Buds, life would have less flavor and enjoyment) was last seen cleansing his palate in his favorite fashion (refer to the photo above). Tas T. Buds is someone who is a connoisseur of good food and drink. He can usually be found at gourmet restaurants (one's that are considered to serve the highest quality food) such as the local beer halls, pizza joints, pubs and fast food courts. In between culinary debacles he can be found writing his magazine column "The Slippery Slider Gourmet" also referred to as "The Slide Guy Loves Food". Currently he is "in the pink" journalistically speaking (which is better than being "in the red").

This Slide Guy loves to slide down things!
Visual Assignment 595 for ds106.